In the first battle to reach the finals, RSRW wins 3:2 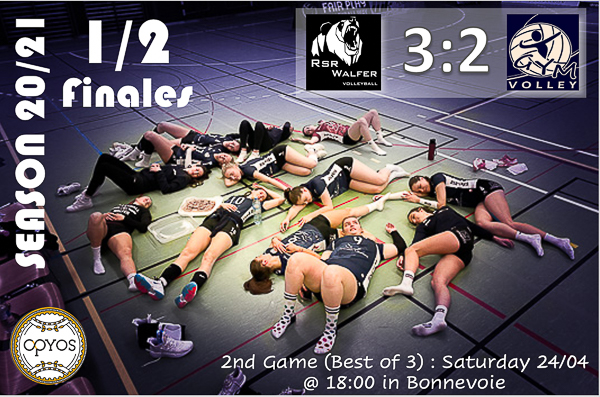 Although many volleyball insiders believe that Walfer is the clear favourite this season, we had to suffer
until the final whistle before it was decided who would start the second game with a small advantage.

From the very first exchanges the commitment and atmosphere of coach Fabio Aiuto's players showed that they
had not travelled to Walfer to play a secondaryrole in this game.
Driven by captain Félicia Menarau (14) and Tsvetelina Nikolova (3), the Bonnevoie girls scored
several times with strong attacks. But the team in general was excllent in defence, no ball was given away unfighted
On the blocks the guests were also very convincing. The score of 2:0 from the CS Gym's point of view was a logical consequense.

In the 3rd set at a score of 21:2, the ladies from Walferdingen managed to take the lead for the first time in this matc. In the end they were
able to prevent a clear 3:0 with 26:24. In the 4th set, the lump is cracked and we could finally see the desired joy of playing.
The opponents seemed physically weakened and had to concede the 4th set to Walfer at 25:19.

The way to the final seemed to be paved. However the Bonnewegians had gained new strength and courage and were leading 8:4
at the change of sides. Nether the Walferdange girls! They did not give up the game and fought for every point in a thrilling game.
In the end, coach Ben Angelsberg's girls had the happier ending with a tight 15:13 in the fifth set.

Now we are warned and know that we have to be even more concentrated and strong-willed in the second match.

See you next Saturday at 6 pm in the RTL Live Arena.