Team Walfer pulls out all the stops 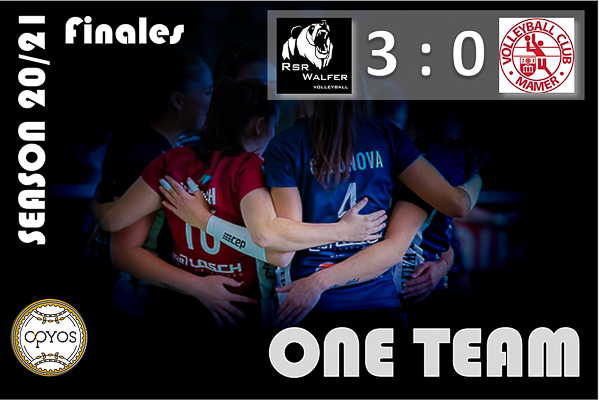 From the opening whistle of this first final, it was quickly clear that Walfer still had the sharpened knives
of the last semi-final match between their teeth and were determined to bring the championship title back
to Walfer this year. Of course, it had to be recognised that neither Corona nor the injury bug could help
this first final to be played under normal conditions. Even if on the Walfer side Marie-Lou, Martina, Anna
and Charlotte were not ready to play, on the Mamer side three important players were missing: Stoyanova,
Ennok and Emmeringer. So it was clear that this first game should be quickly chopped off, the Walfer players
allowed their opponents only 8 points in the first set, 16 in the second. Only the third set was tighter with
22 points for Mamer, even though the game hardly threatened to tip on Saturday. All in all, the players had
a sane attitude, were highly motivated, tactically well adjusted and clearly performed as a united team.
We will see how it looks in the second game next Saturday in Mamer, can Walfer take the championship title
or will the decision be postponed until Sunday? We hope for an exciting game.